Horsham Town Centre’s iconic Horsham Park has been recognised with two major accolades by the 2021 South and South East in Bloom awards scheme, much to the delight of the Council’s Parks and Countryside team and the Friends of Horsham Park volunteer group.

The Park was awarded a ‘Silver-Gilt’ in the Large Park category of the awards scheme and a ‘Thriving’ in the It’s Your Neighbourhood category, which focusses on community participation and environmental responsibility, as well as gardening achievement. 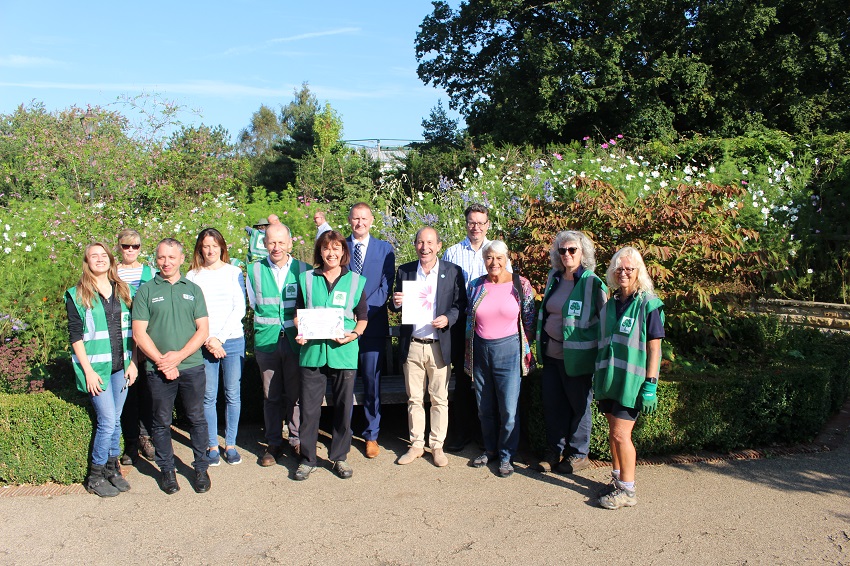 Commenting on this success, the Council’s Cabinet Member for Leisure and Culture Cllr Roger Noel said:

We are absolutely thrilled to receive this recognition.

This award celebrates the dedication that goes into creating, developing and maintaining Horsham Park to such a high standard. I am particularly pleased that we have also been recognised for creating such a vital community facility at a time when our green spaces have been such a lifeline to both local people and visitors.

My thanks go out to our officers and the army of volunteers and partners who have contributed so much to have achieved this recognition. Despite the challenges that went along with the record numbers of visitors over the past 18 months, the highest standards have been achieved.

It’s crucial that the park is maintained to a high standard so that is it welcoming, safe and a great place to play and socialise. Winning the awards is well-deserved recognition for all those who have contributed time, money, energy and ideas to make the park a fabulous place for our community and visitors.

The Park is so important for our physical and mental wellbeing and for wildlife.  That’s why many people willingly volunteer as we seek to nurture and protect this brilliant community space in perpetuity.  Since March this year our Wednesday volunteers have spent a staggering 900 hours weeding, growing, planting, tidying beds and paths – and having fun too.

The South & South East in Bloom campaign is the largest horticultural campaign in the region involving 100’s of communities each year. Participating communities create lasting improvements to their local environment for the benefit of those who live, work and visit.

South & South in Bloom is a unique campaign that enables communities to work across different areas and address a number of issues. It is the only campaign which takes this more integrated approach to community improvement and which uses gardening and horticulture as its foundation. Participating communities are asked to focus their initiatives on three main areas: horticultural achievement, environmental responsibility and community participation.

This means “in Bloom” communities tackle everything from litter, graffiti and anti-social behaviour through to conservation, sustainability and improving horticultural standards, and that’s not to mention the positive impact on sense of place, community spirit and pride.

Contact us to find out more about advertising your business here.